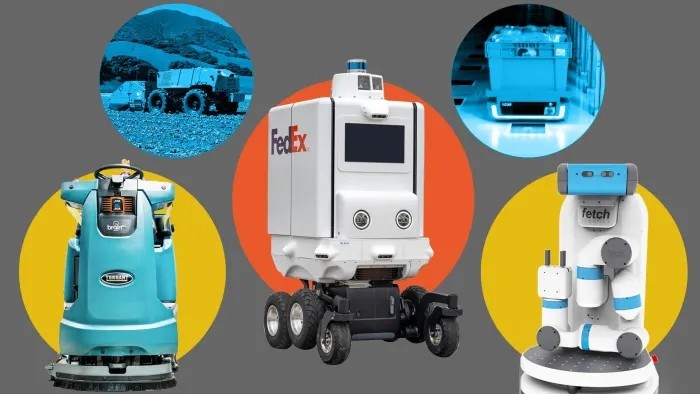 Five robots that hope to save the US food supply chain

As Covid-19 threatens to buckle the US food supply chain,businesses are wrestling with the task of how to feed millions under lock down via understaffed supply chains. As a result, demand for robotics companies whose machine scan harvest, handle and deliver food is surging — rapidly accelerating a trend towards automation that was already under way.

“Everybody's been talking about the automation wave, the AI wave, and this fourth industrial revolution, but these trends were just creeping along,” said Scott Snyder, a consultant and partner at Heidrick and Struggles. “Now suddenly the business case that might have been marginal before— deploying a pick and pack robot in your backroom — is much more attractive.”

At supermarkets including Walmart and Kroger, autonomous floor-scrubbing machines are zooming up and down the aisles every night,ensuring the premises are spick and span.

SoftBank-backed Brain Corp has equipped thousand of robots with its sensors and software since 2016, and now they are collectively performing 8,000 hours of work each day, said chief executive Eugene Izhikevich. Last month the company raised

$36m in response to a new spike in demand triggered by supermarket labour shortages.

“Every day, we give back 8,000 hours to essential workers to do other stuff, for example . . . to precision clean, [disinfect] handles,restocking or just taking a break they need,” Mr Izhikevich said. “So the robots aren’t doing all the cleaning, they are the doing the most monotonous work.”

On farms, demand has surged for automated crop-management solutions. In California, venture capital-backed FarmWise has seen “an order of magnitude” more appetite for its products since the Covid-19 outbreak, said chief executive Sébastien Boyer.

FarmWise’s “agribot” Titan is a giant orange robot equipped with artificial intelligence that enables it to identify weeds for removal, helping growers increase their efficiency and extract more yield from their land.

FarmWise, a team of 50 people, has seven robots up and running at present. According to Mr Boyer, 20 per cent of all field labour in southern California comes from temporary workers based in Mexico. With the border effectively shut amid coronavirus lock-downs, farmers are looking for alternative labour solutions.

Roxo, the “SameDay Bot” from FedEx, is a last-mile courier that can climb stairs and drop off packages at your home. Current prototypes have some kinks — such as getting confused by shadows — but by the end of this year it is expected to be running deliveries for FedEx Office outlets.

In the past few months FedEx has expanded the list of partners seeking to use its service has expanded, which now includes McDonald’s, Walmart, CVS, AutoZone and Target. Collectively, its clients have about 80,000 locations in the US, potentially giving FedEx huge economies of scale to make robotic deliveries mainstream in the next 18 to 36 months.

“We can get the economics to a point where it makes sense to have a fleet of bots lined up outside the retailer or the restaurant, at the ready, to fulfill demand,” said Brian Philips, chief executive of FedEx Office.

San Jose-based Fetch Robotics builds warehouse robots that ferry goods around facilities. The robots, already operational in 22 countries for more than 100 customers, come in three sizes that can carry payloads between 100kg and 1,500kg.

Chief executive Melonee Wise said in the past two months Fetch had shifted its focus to essential providers, helping businesses adhere to social-distancing guidelines. She added that there has been a surge in demand for disinfection robots, so the company was now equipping its machines with tools such as ultraviolet light to kill germs.

“What makes us very unique is that our robots are deployed on a cloud system,” she said. “So we can monitor all of [them] in real time, globally, which makes it a lot easier to support and deploy . . . If you want to buy a robot today, you can have it set up and running in less than eight hours.”

Fabric builds heavily automated micro-fulfilment centres that aim to make grocers competitive with the same-day delivery capabilities of Amazon. Operations at its flagship centre in Israel increased 200 per cent between March and April, and it is now in the process of building its first US centre in Brooklyn, New York.

Before the pandemic, online groceries accounted for less than 5 per cent of America’s

$682bn grocery market, according to Ibis World. That share is now expected to exceed 10 per cent this year.

“What grocers have seen in the last four weeks is what they had expected to see in the next four years,” said Elram Goren, chief executive of Fabric.

Grocers have been slow to adapt to e-groceries because the prospect places them in a catch-22: offer online orders and lose money on each sale, or refuse to offer the service and see a chunk of your business fall away to online rivals.

But by bringing inventory much closer to customers, and using robots to pick and pack items, Mr Goren argued he can change the equation and make a lasting change to how consumers buy groceries even after the pandemic ends.

“I believe a lot of it will stick,” he said. “Covid will shift this industry — or at least accelerate it a few years ahead.”